What is Ad Exchange and How Does It Work?

Ad exchanges (sometimes, referred to as programmatic ad exchanges) are technology platforms that facilitate the real-time buying and selling of online media ‎advertising inventory from multiple ad networks. The approach is technology-driven as opposed to the ‎historical approach of negotiating price on media inventory.‎

There are 2 major players; the Publisher and the Advertiser. The online user is the initiator of the ‎process, while the exchange makes it all happen.‎

What is an ad exchange?

The approach is technology-driven as opposed to the ‎historical approach of media buyers negotiating prices on media inventory in private exchanges in private marketplaces.‎ In general, in the global ad market today, technology is the main factor in how, where, and when an ad is served. In ‎this article, we will outline how ad exchanges work, how you can buy ad inventories and the process in which an ad ‎is served in auction decision-making in the digital marketplace.‎

Publishers: The publisher is the owner of the website, for example, the owner of a popular news site. Publishers are essentially selling ad space on their site, and therefore use the services of supply-side platforms.

Advertisers: The advertiser is the company who created the ad to promote a product or service. They want to buy ad space from multiple publishers and therefore use the services of demand-side platforms.

Users: The online user initiates the ‎process by visiting a website. The users are exposed to ad impressions while on the publisher’s website

Ad Exchanges: The ad exchange makes it all happen, showing the right ad impressions to the specific user on the publisher’s website. Supply and demand-side platforms interact on ad exchanges. 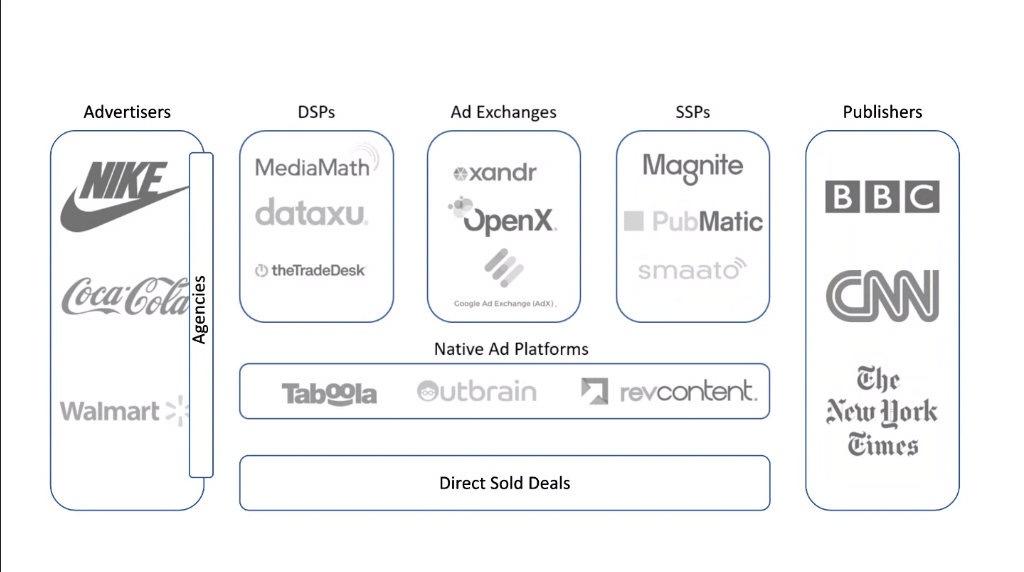 How does an ad exchange work?

When a publisher’s page loads with an ad slot, an ad exchange sends the ad slot request to bidders whose ads meet the publisher’s specifications. It reviews all advertisers and uses advanced ad tech to show the ad with the highest CPM that meets the publisher’s criteria.

When a user reaches a publisher’s website with an internet browser, a page request is made.‎ The site loads the page with the images, articles, and HTML data provided by the publisher’s ‎web server. While the site loads, specific areas in the site that are set as ad slots call the ad ‎server.

The ad exchange presents the ad slot request for the bid request, while defining the publisher’s specific ‎requests regarding things like geo-targeting, frequency capping, permitted advertisers, and additional targeting ‎options.‎

All advertisers on the exchange apply for the auction, and the ad exchange then ‎reviews all advertisers. First, it eliminates the advertisers that do not meet ‎the hard targeting audience segments requested by the publisher. For example, assuming the ad is set to be served to French-speaking users, the ‎exchange will eliminate all non-French ads, ensuring ‎that ad impressions are directed only to the requested target audience.‎

Since the advertisers can have campaigns in CPA, CPC, and CPM payment models, the ad exchanges align all campaigns to one common denominator in order to ‎compare all applied advertisers as optional bidders. The winner is determined based on the highest ‎CPM, and the ad is then served to the ad slot and the impression is presented to the user.‎

This entire process has to happen virtually instantaneously to ensure a quality experience for a ‎website user. In the space of less than half a second from the moment the page begins to load, the publisher’s tools farm the ad space off ‎to an exchange, the exchanges receive bids from advertisers, the ad inventory is ‎filtered through the verification systems (targeting), and the ad of the highest bidder is delivered to the publisher sites.

Ad network vs ad exchange vs SSP vs DSP

An ad network is an aggregator, an intermediary, like a warehouse that offers a digital ad inventory. Ad networks collect inventory from publishers and sell it to advertisers. Buyers can access campaigns in ad networks, but they aren’t really a technology platform, don’t offer real-time bidding, and don’t have auctions. Ad networks sell inventory on the exchanges like the other players in the market, and therefore an ad network isn’t the optimal solution in today’s market. Like private ad exchanges, they are more of a relic of the past.

Difference between ad exchange vs DSP

Difference between ad exchange vs SSP

An SSP, or supply-side platform, helps publishers monetize advertising space by helping publishers show the best ads for their audience. They generally don’t maintain ad inventories themselves, but rather work with several ad exchanges to present the most relevant digital advertising for each page location. Although they sometimes use privately traded ads and ad networks, they rely mainly on multiple ad exchanges for monetization, and include anything from small websites to premium publishers.

Examples of ad exchanges for publishers

Publishers have several options when choosing ad exchanges. In addition to the large programmatic ad exchanges, they can also utilize mobile and native ad exchanges.

A mobile ad exchange is an exchange that specializes in delivering ads to mobile devices and in-app ads. Ad networks trade their ad inventory on mobile exchanges, targeting any content viewed on a mobile device.

In native ad exchanges, ads aren’t served as an organic whole, but rather ad formats are split into components like image, text, and data on the target page. Ad tech that specializes in choosing ad formats can then use those components to make the ad look like part of the site where it appears by making changes to the font and format.

Native ads are served by widgets created by a native ad platform such as Taboola, Outbrain, Revcontent, and Gemini. Each platform serves its own ads on its own widget—Taboola serves Taboola ads for example. The ads appear on a specific page and are disguised to look like part of the publisher’s site, often in a section that offers content recommendations, and links to other articles together with the native ads. It’s not really an ad network and there here is no auction or programmatic ad buying involved. All the publisher has to do is put the widget in the digital advertising space, and native ad platforms like Taboola, Outbrain, Revcontent, and Gemini do everything else needed to drive user visits.

Although it’s not as big as Google, the Yahoo Ad Exchange also works with thousands of advertisers and publishers and supports the whole process of buying and selling ads, including real-time bidding for programmatic advertising.

Openx is another open ad exchange that advertisers, publishers, and ad networks can use to buy and sell programmatic advertising using real-time bidding.

Recently acquired by Microsoft, Xandr focuses on the intersection of TV and digital with its open, end-to-end platform. ​

What’s right for you?

None of the platforms described in this article are closed private exchanges. Buying and selling modes are entirely automatic, and, when using them, publishers are exposed to significant ad quality and fraud risks. Programmatic channels leave publishers vulnerable to an array of malvertising and ad quality concerns, leading to user churn and repetitional harm. That’s why, no matter what ad exchange you work with, it’s important to add an additional layer of protection so you can ensure that only the safest, most appropriate ads are shown to your audience.