Liftable Media, Inc. is a top 10 digital publisher consistently ranked among the Top 50 most visited media networks in the U.S. By working with GeoEdge, Liftable Media has not only reduced ad complaints significantly, but also has found an 83% decrease in offensive and latent ads!

COO/CFO, Ford Jordan had this to say: “GeoEdge has really helped us get a handle on our programmatic ads and make us feel confident that we are delivering secure, quality ads to our user base.”

We are proud to share this success story – read the full case study here! 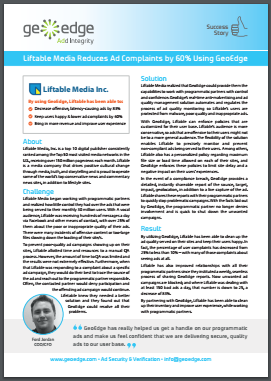 Challenge
Liftable Media began working with programmatic partners and realized how little control they had over the ads that were being served to their monthly 30 million users.

With A vocal audience, Liftable was receiving hundreds of messages a day via Facebook and other means of contact, with over 25% of them about the poor or inappropriate quality of their ads. There were many incidents of offensive content or too-large files slowing down the loading of their site/s.

To prevent poor-quality ad campaigns showing up on their sites, Liftable allotted time and resources to a manual QA process. However, the amount of time to QA was limited and the results were not extremely effective.

Furthermore, when Liftable was responding to a complaint about a specific ad campaign, they would do their best to trace the source of the ad and reach out to the programmatic partner responsible. Often, the contacted partner would deny participation and the offending ad campaign would continue.

Lifetable knew they needed a better solution and they found out that GeoEdge could resolve all their problems.

Solution
Liftable Media realized that GeoEdge could provide them the capabilities to work with programmatic partners with control and confdence. GeoEdge’s real-time anti-malvertising and ad quality management solution automates and regulates the process of ad quality monitoring so Liftable’s users are protected from malware, poor quality and inappropriate ads.

With GeoEdge, Liftable can enforce policies that are customized for their user base. Liftable’s audience is more conservative, so ads that are ofensive to their users might not be to a more general audience.

The fexibility of the solution enables Liftable to precisely monitor and prevent non-compliant ads being served to their users. Among others, Liftable also has a personalized policy regarding maximum file size or load time allowed on each of their sites, and GeoEdge enforces these policies to limit site delay and a negative impact on their users’ experiences.

In the event of a compliance breach, GeoEdge provides a detailed, instantly shareable report of the source, target, impact, geolocation, in addition to a live capture of the ad. Liftable shares these reports with their programmatic partners to quickly stop problematic campaigns.

With the facts laid out by GeoEdge, the programmatic partner no longer denies involvement and is quick to shut down the unwanted campaigns.

Result
By utilizing GeoEdge, Liftable has been able to clean up the ad quality served on their sites and keep their users happy. In fact, the percentage of user complaints has decreased from 25% to less than 10% — with many of those complaints about seeing ads at all.

Liftable has also improved relationships with all their programmatic partners since they instituted a weekly, seamless process of sharing GeoEdge reports. Now unwanted ad campaigns are blocked; and where Liftable was dealing with at least 150 bad ads a day, that number is down to 25, a decrease of 83%.

By partnering with GeoEdge, Liftable has been able to clean up their inventory and improve user experience, while working with programmatic partners.

Transparency: open yourself to new business